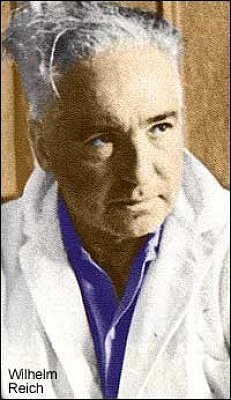 The technology of the p.e.bal and the Nu-Me pendant owes a lot to the work of Dr. Wilhelm Reich. He was a gifted and visionary scientist that fled the Nazis to America. It was here that he discovered a form of energy which he called orgone. Orgone, is certainly the same energy as Chi, Ki, Prana, zero-point, life-energy. 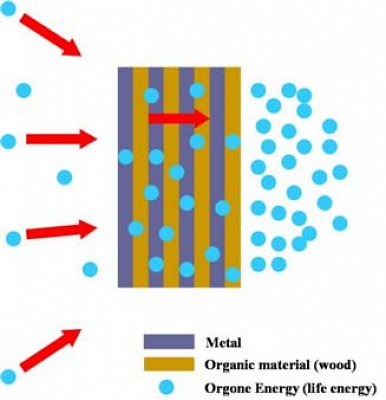 More importantly for our devices, Wilhelm Reich worked out how to move orgone in a big way. He discovered that if you take metal and an organic material and put it together in layers it would act as a magnet to this energy. The metal would attract the orgone and then release it to the organic material (wood or cotton usually) and then Reich made big boxes out of layers of metal sheet and wood that he called orgone accumulators . He would put his patients inside these boxes and they would receive high doses of concentrated orgone into their bodies. Some of these patients had advanced stages of cancer and they were cured. These kinds of activities made him a controversial figure and in conflict with some powerful concerns. This was almost certainly the reason he found himself in prison where he met an early death.
Much more recently, within the last three decades, people have rediscovered Reich's work in the form of "orgonite". This is simply metal particles suspended in hardened resin - the resin being the organic component (made from oil). Now these orgonite devices acquired a new component which Reich's creations lacked - crystals.

Crystals have some amazing properties. This is something that people have been consciously or unconsciously aware of for many thousands of years. They balance energy - orgone / life energy. Now this is important because Reich's devices had a big flaw which made them potentially very dangerous.
Reich determined that orgone came in two forms. One he called POR or positive orgone and the other DOR or deadly orgone. The latter is a disturbed energy that is generated by electrical machinery and nuclear power plants, and emotionally unstable people! Now Reich got very good at moving vast amounts of Orgone around but he had no control over which type. This resulted in a few incidents where he made himself and his staff very sick when the ambient energy was saturated with DOR.

Orgonite is generally quite bulky. If you want a strong energy device then you are looking at using lots of resin and metal. A simple but very effective way to boost the power of any orgone / life-energy device is to add copper coils. Life-energy / orgone / chi loves to follow a spiral path (as in our DNA!?). We have some special air-cored copper coils that have been made specially for us. These are in all but one (Negater Shell - designed to be more gentle) of our own energetic devices. These coils generate a big vortex and so accelerate the flow of energy through each device. This allows for a small energy tool to have a big energy effect and opens up the possibility for compact energy jewellery such as the Nu-Me

OK, I have completely finished the history lesson now and am going to try and help you understand how exciting this stuff is by throwing one or two ideas your way.
I hope this has promoted some thought on some of the benefits of having our energy balancers in your life. Combine this with the fact that the energy fields generated by all this moving balanced energy harmonize and remove the stressing components from EMF and geopathic stress radiation (see more in our solutions pages/videos), and you will see that these devices are very useful, if not vital, to have around!

All Life Energy designs Ltd products are individually made, and are not factory produced, so each item is as unique as we are. Enjoy the care and joy that went into the production of each one.

The most powerful EMF shielding device we now produce.

The Nu-Me Skinny Unity says it all "the state of being one; oneness" and is slimmer and lighter with improved technology giving it a more powerful and larger protective/balancing field. Being reversible – our trademark spiral on one side and the Unity design on the other also makes it beautiful piece of jewellery that comes with a cotton cord in a gift pouch.

The Ki-Bal or mini P.e.bal. Protection, balance, and making you stronger wherever your keys are!

Stack them for a mighty 29 metres (31 yards) of protection. Use them individually for personal needs. Complete versatile protection to cover every place and situation. Great Feng Shui tool. This boxed set with inspirational cards and each stone in a velvet pouch is the ultimate gift – even to yourself.