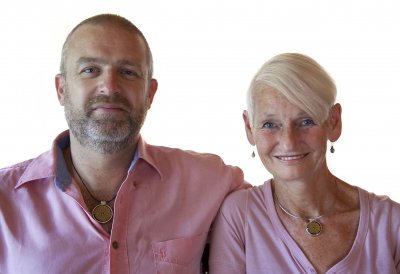 We started Life Energy Designs in 2003 when we came to this beautiful land that we now call home, New Zealand. But the seeds were sown long before and half way around the world in Africa.

It was in Kenya that we (David and Margie Slinger) started on the journey of education and awareness about energy balancing and EMF protection.

Ours is a story that movies are made from – horror movies - but with a happy ending!

While digging the foundations of our house and business, 100 kilometres from Mombasa, we found human skeletons! Skulls, and every conceivable bone of the body. We discovered that we were living on a burial ground for slaves. The local tribe knew of course, no sane African would live there. We were completely naive and didn’t question why this paradise plot on the beach groaning with mango trees and baobab trees that had stood there as guardians for thousands of years. Was not habited.

We were freaked out. Well who would go and dig up a grave yard and live in the middle of it by choice? We were committed financially up to our eye-brows. We couldn’t run however much we wanted to from this historical atrocity.

We needed a solution – and fast!

After making devices and burying them, not only on our plot, but in the caves where the slaves had been held, without food and only the drips from the roof of the cave and a muddy pond for water, before being shipped to the slave markets in Zanzibar. Naturally many, many died in the caves and were then thrown into huge pit graves on the land that we now called home. We also dropped devices in the sea.

Changes were swift not only to the energy of the place, and it was very dark, negative energy, but also to people's health.

It was during this time that came to learn about Electromagnetic radiation. The irony was that although we lived in a traditional village with no electricity, running water or toilets there was a cell phone tower! The Africans who could hardly afford square meals struggled to own cell phones which they proudly carried as a status symbol while they were unaware that they were destroying their health.

The local hospital boomed with new patients. And so our research and education on life energy and EMF continued.

We gave away devices and monitored the results. They changed people's lives.

Testing, learning and testing some more has been the path we have been led along - and that we have taken. Lots of people have helped us along the way. And we are thankfully still receiving lots of help and support. Life Energy Designs wouldn’t exist without an extended team of supporters who make all our work possible.

receiving lots of help and support. Life Energy Designs wouldn’t exist without a extended team of supporters who make all our work possible.

David’s invention of a pulsed scalar wave machine the Quantum Trail blazer (QTB) has taken Life Energy designs in a new and exciting direction. The research and testing of several years has now resulted in a marketable machine. Keep updated on this here ……..