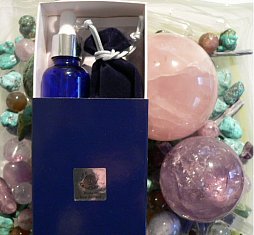 To view a video version of this blog scroll down to the bottom.

I’m a fan. A devotee. I must admit that as a novice I made my Gem Elixir with negativity and a hint of scepticism. I have used vibrational medicine in many forms for many years. And I adore crystals. But making my own vibrational medicine from crystals – well that was another matter.

So I set to it and made my Gem Elixir. Well it wasn’t exactly rocket science, in fact it took so little time and brain power that I felt almost guilty that it was so satisfying. We have some blue drinking glasses which have sat in the cupboard forever being saved I suppose for a special occasion. This was that occasion so I washed the layer of dust off – more guilt at my poor house-keeping – added filtered ionized water and the scalar embedded Rose quartz crystal in one glass and the Amethyst crystal in another, put them on the garden table in full sun and let the magic happen.

Now I am not a patient person, so waiting to take steps delayed my sampling the Elixir. I admit – with a modicum of shame that I tipped a small amount into a glass of water and drank. Well – I can only describe the taste as heavenly. A smooth, velvety taste (how on earth can you describe a taste) that wanted me to drink deep and long as if my thirst would never be sated. I kid you not.

I was converted. I use my Gem Elixir in every drink now and have a few drops under my tongue in between. I have become a Gem Elixir junky.

I am enjoying the many benefits of this addiction – maybe I will list them all later but why I wanted to write this was to tell you about an unexpected and marvelously welcome one. Relief – utter and complete from my ongoing reflux and chronic indigestion. The results of ignorance and neglect of myself in years long gone and ongoing self abuse by eating foods that I can’t resist even though I know that they will make me suffer. For those that are smiling – in my defense, these aren’t all unhealthy, beans for instant come in many forms and delicious recipes – but are a killer. Ok so I admit that my cappuccinos some times bite me and square of chocolate can bring tears to my eyes. But – hand on heart, and touching wood, since taking my Gem Elixir regularly I haven’t had a moments discomfort, burning pain or bout of burps.

Which is best for my indigestion – Rose or Amethyst? I honestly don’t know because I alternate or take whichever bottle is nearest. I know it’s not exactly a controlled testing, but I don’t care. It works. My Gem Elixir has contributed to my wellbeing in a very unexpected and wonderful way. Good-bye indigestion!

I will keep you posted.