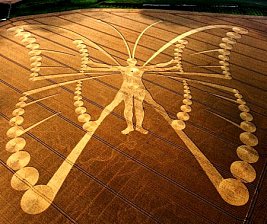 This stunningly beautiful image of a "mothman" or "human butterfly" appeared in a field in Goes, Holland on August the 8th 2009. It shows a clear reference to Da Vinci's Vitruvian Man forming the body of a huge butterfly. It is so huge in fact to be the largest crop circle ever to be recorded and it measures a massive 530x450 metres (580 yards x 492 yards) - something like 4 football fields.

I love crop circles and have had a crop circle calendar on my office wall for the last 3 years. They are stunning pieces of art laden with symbolism. Some of this symbolism can seem a little ambiguous at the best of times. This one, however, seems pretty clear to me.

2012 - the end of the Mayan calendar and a much talked about event in many circles of belief. The doomsayers are, of course, predicting the end of the world/death/mayhem etc. However, I resonate much more with the idea that we are heading for the end of a cycle and are about to take an evolutionary leap as a species.


What better way to illustrate an evolutionary leap than to use the symbolism of a butterfly? 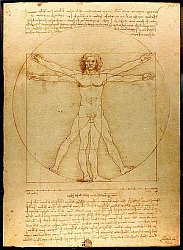 So who is sending this message? Is it a very large team (60,70,80?)of Dutchmen with black balaclavas and an assortment of planks (preferably with a helicopter spotter to guide their movements across the field). Yeah, right!


Or is it part of the Pleiadian or Plejaren cereal education program for their Earth cousins?

To me, the message of all the crop circles (except the few inferior specimens that were made by the balaclava brigade) is pretty clear. We are not alone in the galaxy and it is time to step up to rejoin our cousins as part of the galactic brotherhood.

The brotherhood does not accept caterpillars, however. Roll on the evolution!

Watch the video version of this article below