Crop Circles - a way to communicate?

A crop circle in Wiltshire England was formed in the symbol of the creative forces of Earth, which is also the symbol of infinity, and emblematic of Merlin, Allah, and Archangel Michael.

Crop circles are a design laid down in a growing crop. The surrounding crop is still growing normally. But how are they formed, and by who?

Crop circles are one of the most interesting, unexplained phenomena in our world today. Their complexity and awesome beauty raises many questions – what, who, why? What other intelligent life forms are there out there trying to communicate with us by using crop circles in such an incredible way.

In Overton, Wiltshire, England there was a crop circle in a figure 8 which in Islam is representative of the Moon. The Moon is associated with Allah (God).

The geometric expression of 8 is the octagon, and here the story comes full circle; the octagons 8-times 135-degrees equal 1080, the actual radius of the moon, as discovered in modern times.

So how did the ancestors know this?

Symbol of the creative forces on Earth, 8 in Western science defines the periodic table of elements which is formed in groups repeating in patterns of eight. Even the doubling of human cells proceeds in eight stages.

And as 8 when vertical it the sign of infinity - you can see this on one of the sides of the p.e.bal. It is also emblematic of Merlin, Allah, and the archangel Mikael. 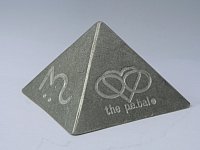 Archangel Michael (Mikael) has also been ascribed to one or two primary magnetic lines which flow (like dragons) across the face of the earth. In ancient times sacred sites were built on these pathways and people tapped into their beneficial energy. These temples were later superimposed by Celtic chapels, Gothic cathedrals and Christian churches.

When this crop circle in Overton appeared it lay directly over one such energy line which traveled to the nearby church. Incredibly the church is dedicated to St. Michael! This shows how there is a connection between crop circles, ancient sites of veneration, and ancestral wisdom.

* picture and some facts from "Crop Circles" by Freddy Silva