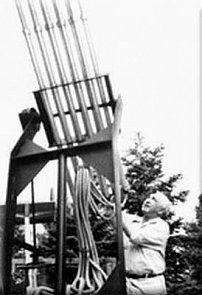 Wilhelm Reich was experimenting with what he called cloudbusters to modify the weather. He had much success which is being repeated today.
What Reich called a cloudbuster was little more than an array of long copper pipes fixed to a wooden frame that he used to point into the sky. The basic theory behind the cloudbuster's operation is that the pipes act to draw orgone (life-energy) from the sky and affect the local energy flow and, as a consequence, the weather patterns. Reich likened the function of his cloudbuster to a lightening rod working on orgone energy rather than electrical energy.
On July 6th 1953 he was summoned to Maine at the request of a drought-troubled farmer. The proposition was money for rain. He promised rain within 24 hours and he delivered on that promise the very next morning. The event was witnessed by government agents who later arrested him. He died in prison on November 3rd 1957.


As you might imagine weather modification was a political hot potato, almost as hot as curing advanced stages of cancer achieved with his orgone accumulator! Besides political dangers there is another danger associated with this technology, that of negative health affects for the operator. The cloudbuster draws down large amounts of disturbed energy or DOR. Reich's design allowed for this to be drawn away into flowing water but the mere proximity to the cloudbuster could seriously threaten your physical wellbeing.
Skip forward to the late 20th century when people were experimenting with Reich's technology in the form of crystal-embedded resin/metal matrix orgonite. Don Croft, an orgonite pioneer, had the idea to build a device similar to the cloudbuster but with orgonite at the base. These modified cloudbusters or chembusters have the same potential to affect the weather and have been used to break droughts in various places including Namibia.
After Reich's experience, cloudbuster operators are more than likely operating rather quietly under the radar! Because of the energy transmutation of the orgonite with the crystals the negative health effects are avoided (and even reversed).
The reason these modern cloudbusters are often called chembusters is that they are being used to counter a modern-day phenomena known as chemtrails.
Chemtrails appear from the back of high-flying jet aircraft and initially look like normal contrails. The resemblance to contrails ends when you realize they are not dissipating quickly and are being laid out in lines or grid patterns in the sky.
Theories for chemtrails' existence (which is always denied by government agencies) range from weather modification through solar energy reflecting aluminum particles to a more sinister population control through delivery of health-destroying pathogens to the masses below.
There is much information about chemtrails on conspiracy sites but reports are now to be seen on mainstream media. NBC channel 4 in America recently aired this. chemtrail videonews story text.
Search for more using "chemtrails" "Operation Clover Leaf" and "Operation Rain Dance".
There are many energy activists around the world making cloudbusters. We, of course, have one in our garden so Aucklanders we've got you covered! If you would like to make one yourself this site has some good instructions.
If this seems a little daunting you could make a simplified cloudbuster using a p.e.bal or other such strong orgonite device and some long pipes planted in the ground. The pipes can be copper water pipes (expensive unless you have good access to scrap) or aluminum scaffolding pipes (cheaper and often available at scrap merchants). However many pipes you use you will need to bind them together with a wooden frame or jig. This can be plywood drilled out or the pipes could be bound to a stick frame.
When the pipes are joined together they should be earthed with good contact to the ground on soil or in water (pond). The p.e.bal needs to be placed in the center. Do not remove the p.e.bal from its position without first laying down the pipes as you could expose yourself to high concentrations of disturbed energy.
Wishing you clear blue skies,